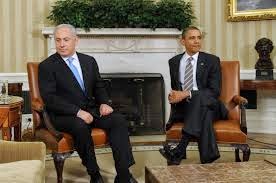 Colicky Crying Baby Bibi, “The Republican Senator From Israel” is Leading Israel into Another Quagmire of Self-Destruction and Pariah Status!
Bibi’s recent gratuitous assassinations of an Iranian General and a Hezbollah official near the Golan Heights in Lebanon demonstrate once again how Israel, founded on the blood and guts of Diaspora Jews, as well as IDF soldier, is being led into a quagmire of self-destruction. Even the prestigious Jewish/Yiddish paper/blog Forward has printed in bold letters the following words:
“BIBI’S BAD CHOICE!”
The Forward did not print that bold statement just to make a sensation. They articulated in a very elegant, calm, non-religious fashion the reasons why Bibi’s  impetuous, completely narcissistic desire to deliver an unwanted speech in front of the US Congress defending his untenable position in trying to destroy the Iran Treaty--- insults both the United States President Obama; as well as the American people, especially the American Jews, who purportedly are the back bone of support for Israel. 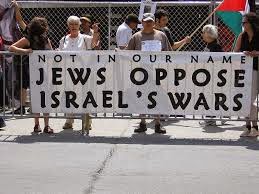 The Forward quotes the following statistics and important personnel in the USA:
• Bibi’s appearance coalesces both the left wing Jews in America, represented by J Street [Soros] alongside right wing Chris Wallace [Fox News; Murdoch’s mother was Jewish].
• Both extremes of the American political spectra agree that Bibi’s actions can hurt Israel, qua Israel; as well encourage the ratification of the Iran Treaty, more quickly.
• Even Bibi’s ex Former American born Israeli Ambassador to the US, Michael Oren, says the [Bibi] speech was a ‘cynical political move’ that could ‘hurt our attempts to act against Iran’
TRIFECTA! 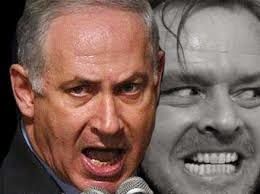 A childish narcissist like Bibi who was bred and raised in the cradle of luxury outside of Philadelphia, PA. [nowhere near Israel] mistook his entitled breeding for understanding the very people, Americans, who gave him the unique opportunity to become the Prime Minister of Israel.  First, and most importantly, Bibi never really appreciated how much Israel’s independence and survival really depends on America’s goodwill. It’s not a mandate from heaven that orders us Americans to assist and abet Israel in her most dangerous times.
Bibi was not there in the 1970’s when another American born Prime Minister of Israel, Golda Meir, begged (yes, begged, pleaded) Nixon and Kissinger [German Jew] to immediately aid her and Israel to avoid defeat in the Yom Kippur War. Nixon, not known as a Hebraic scholar, went out of his way to order ASAP American Fighter Jets to fly into Israel; and quickly allow Israeli fighter pilots to take over control of the American Jets that were on the ground with their after jets still burning,  marked with Israeli markings and allow them to save the day for Israel. At that moment, Nixon literally saved the Israeli nation. And according to the John Dean, the snitch of all snitches, Nixon was supposed to be an “Anti-Semite”! 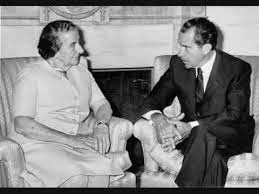 By coming to America and delivering a nonsensical speech about the dangers of Iran, when in fact Pakistan already had 250 plus atomic bombs, insults our President, our Congress [that may be too stupid to know when it is being insulted] and most importantly, alienates the preponderance of American Jews.
The Forward:
“Apathy on Israel is far more dangerous in the LONG TERM than a few angry college kids protesting the occupation [West Bank, Gaza]. …. Whoever is advising Bibi is showing their ineptness at reading and reaching the majority of American Jews…” On a more objective level, as if this would matter to the emotional immature Bibi, “the Pew Research Center 2013 Survey of American Jews showed that 53% APPROVED of Obama’s HANDLING OF IRAN compared with 41% of the public as a whole”. [Forward].
The problem of Bibi is quite simple.
He is immature, self-absorbed and bereft of strategic concerns or ability to map out a course for his country for more than a week or two of fighting and repression. It is time for the Israelis to change course ASAP. 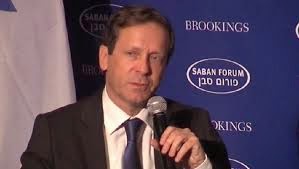 In the middle of March, 2015, Israel has the choice to vote for two Sabrahs whose family marked the true history and legacy of the Zionist State—Isaac Herzog and Livni Tsipi. Whatever their collective views for both these alternative candidates of the new Zion Party, they represent a history and future potential truly rooted in both Judaic history/ Diaspora and Zionist Terrorism, upon which the state of Israel was founded.
Chaim Herzog, the father of Isaac Herzog was an Irish-born Israeli politician; General of the IDF; and lawyer who served as the Sixth President of Israel. Chaim had fought for Irish Independence; and his famous Talmudic father, Rabbi Yitshak Ha Levi Herzog,  spoke fluent Irish Language and was knows as the “SEIN FEIN RABBI” [Irish Republican Army].  Go Irish! Chaim volunteered for the British Intelligence Corps in WWII and participated in the Liberation of several concentration camps. Chaim also was involved in the capture of the notorious Nazi Heinrich Himmler. Finally Chaim joined the new born Israeli Army as Chief of IDF Military Intelligence , 1948-1962. He then left the IDF as a Major –General.
Try to match that one, Bibi! with your draft-dodger father.
Herzog was appointed Israel’s Ambassador to the United Nations, serving until 1978. In 1981, Herzog entered politics for the first time and became a member of the predecessor party to the Labor Party.

Similarly, Bibi’s other opponent, Tzipi Livni has an equally impressive background. Her father was the Operational Director of the Irgun Zve Leumi [ETZL]—Menachim Begin’s ‘Jewish Terrorist’ group.  She grew up in Betar [which I had joined as a youngster] and then went on to many prominent senior legal and political positions in the new Israel.
Therefore, what we have here is the case of the colicky baby Bibi who wants what he wants when he wants it. On the other side of the nursery we have true Sabras born and bred of the best and the brightest of Israel’s scholar/warriors….. which one will continue to rule?
Let me end with the words of a Jeffrey Goldberg in the Atlantic:
“A sitting President [Obama] cannot be written off by a small dependent ally, WITHOUT TERRIBLE CONSEQUENCES!” [my emphasis].