How to Make an Academy Award Best Film/Script:
Start with three hours about a completely insignificant subject like your own family problems- Make certain you record it over twelve years. Ta-dah! the movie “Boyhood.” Produced, Written, and Directed by Richard Linklater, it will be a front runner for Best Film/ Script.
You must know that nothing exacerbates me more than a pretentious person, story, or movie.  In my opinion, Boyhood, a 12 year pseudo-documentary of a family growing up in the hip-state of Texas is beyond BOREDOM! Clearly, I am in the minority of reviewers who feel the opposite according the blurbs on the movie jacket:
“One of the most EXTRAORDINARY movies of the 21st Century” . [A. O. Scott, NY Times.]
“A New American Classic. ACTING OF THE HIGHEST RANK. A four-star game-changer that earns its place in the cultural capsule. Boyhood makes us feel euphoric about movies again.” 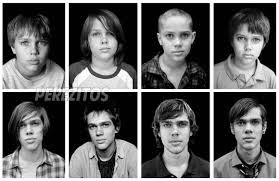 I found the opening fifteen minutes of the film intolerable in terms of subject matter; acting; and a major lacuna of storyline. However, never one to take myself completely seriously, I sat down again at the grueling insistence of my friends and neighbors who convinced me that I should watch the whole film.
Well, I did.
Let me say this. I would rather be tortured by counting the blades of grass in my front lawn than watch this exceedingly boring movie. Imagine your most narcissistic family member, insisting on your watching family movies with a Bell and Howell projector for three hours; wherein, your relatives about whom you cared less than nothing, grow up in front of your eyes from bratty little kids to surly, mumbling, angst-ridden teen-agers… who, of course, are Obama enthusiasts!
Next imagine that there is no drama whatsoever except for the fact that the rotund Patricia Arquette transforms from a single mother without work to a sophisticated Psychology Professor at one of the Texas Universities or extension courses. Imagine the usually talented actor, Ethan Hawke, aging in front of you over three hours, splattering inanities about life while his son the surly, angst-ridden boy/teenager who wants to be a photographer, read: Director Richard Linklater, goes through puberty at the same time as the rate of catabolism breaks down our bodies. 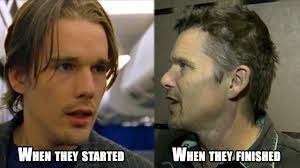 If by now, you are still hooked on this film and consider it a classic then you have too much time on your hands. The dialogue in general is simplistic, if not prosaic. The story line of a liberal film turning toward Christianity and supporting the second Amendment has more to do with the Director/Writer/Producer’s [same guy] incredibly patronizing attitude toward the town/people with whom he grew up in Texas.
Full disclosure: I also hated Million Dollar Baby —and it won, Best Picture Award. My point is that spin doctors have taken over reality and quality be it films, politicians, or events –so that the mundane and boring—bereft of drama or organic tension—is HIGHLY REWARDED and GLORIFIED.
As for those other films in which there was drama, tension and real acting---GOOD LUCK. You don’t have a prayer than to receive anything but a few head nods and maybe a good review from this blogger. However, amidst 6000 plus Academy Members, I really don’t count.


Too bad, “Whiplash” and “American Sniper” were great films. 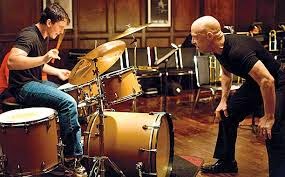